A weekend away. Love.

03.02.2010
Jason had his birthday on Friday. He got a bipod for his new rifle. And a scope. And we took a weekend vacation. (Although, I’m thinking the vaca was more for me than for him, so I won’t count it as one of his birthday presents. Because you know I keep track.) My adorable and wonderful sister Ashley came and stayed with the kids again. And spoiled them rotten. Again. She took them swimming and out to eat. All six of them. And she took them to Sacrament Meeting. All six of them. By herself. What a crazy girl. Thank you Ashley Dawn. I soooooo love you. 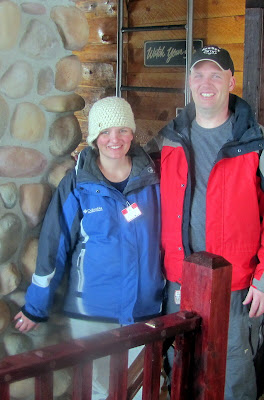 The weekend was really great. We rented a cabin out by Bear Lake for the weekend. We spent Friday afternoon running some errands and slowly making our way north. We stopped and had dinner in Logan at the Bluebird Cafe. We grabbed some groceries and got to the cabin around 10pm. The next morning Jason and I got up and went skiing at Beaver Mountain. This was pretty much my first time skiing. (I went one time when I was 14, for a few hours, in Illinois.) The most traumatic part of the morning for me was the ski lift. I am deathly afraid of heights, and it was very high! I spent my 6 hours on mostly the smallest slopes, trying to get the hang of it. I didn’t really get going fast enough to get hurt… so i didn’t get hurt! Although, I’ve never been more sore in my entire life. Jason, on the other hand, is a pro. He used to ski a ton in high school, and it shows. He looked really good shwoop-shwooping down the slopes. He spent a good part of the day with me, but when I would stop to rest for 20 or 30 minutes, he’d hit the higher slopes. (I refused to even consider them, based solely on looking at how high the ski lift went!) It was fun. We got back to the cabin around 3pm, and Casey and Tanya were there. 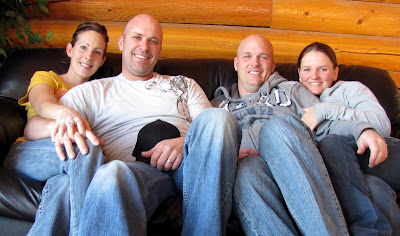 The rest of the weekend we just hung out at the cabin with Casey and Tanya. It was so fun to just kick back, relax, and play games. We didn’t even go out to eat at all, just cooked at the cabin. We decided that Password is one of our new favorite games, and had so much fun. We are so glad you guys were able to come with us. And we are really sorry that you got stuck when you were leaving and had to flag down a stranger to pull you out because we had already left you in the dust. Love you guys. 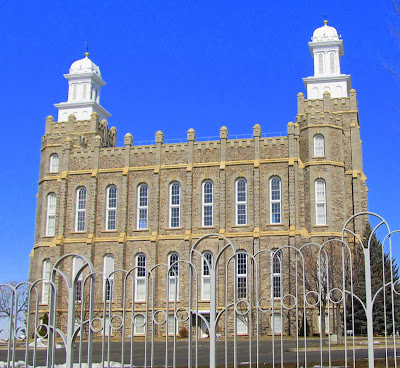 On the way home we stopped and drove around the Logan Temple. It looks so much like a castle up close. I remember as a little kid, whenever I would see it in the dark from far off, it always looked like there were two ghosts hanging out on top of the temple. 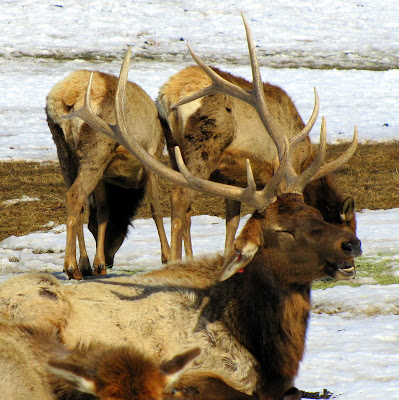 We also stopped by Hardware Ranch in Hyrum and took the sled ride out to see the elk. It was really neat, there were about 350 elk there that day.

We took our time getting home, stopped for lunch and drove around a bit. All in all a great relaxing weekend that ended way too soon. We missed the kiddos though, and we’re glad they had a good weekend too.
« Mom’s little helper
Ice Skating »