And then there was More Camping

10.13.2010
So, the weekend following campout we loaded back up and headed back in. It was a shorter campout, just a couple days, but it was a lot of fun. It was nice because our tent spots were already flat, we knew right where everything needed to go, and the company was fantastic. I was so glad my brother Ryan and his wife Jocelyn were able to join us for a couple days. Wish we camped with them more often. It was so laid back, with nothing planned. Just the way I like it. We brought the washers which are always a hit. Please click on this picture, and then zoom in so you can get the full effect of Cody’s washer enjoyment. 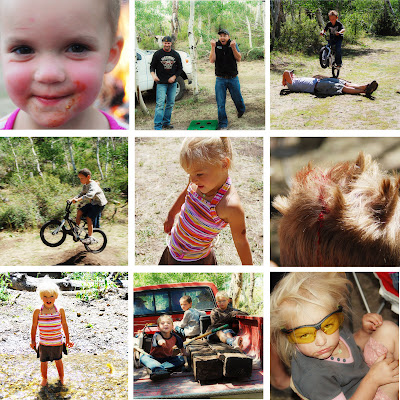 Cody built a dirt ramp in the middle of the road and the kids had a blast jumping their bikes off of it. Cole was definitely the most daring, being the first to jump over his dad. Or does that make Cody daring? Jaxson and Teegan followed by jumping over their dad. Then Cole went for the big one, jumping over Rae and Cody side by side. Something caused him to hesitate, and there was a major wipe-out. A bloody head and a few minutes later he was back at it. The big boys had work detail on Friday and were able to get it all done before Ryan and Jocelyn came. Saturday was nice and relaxing. 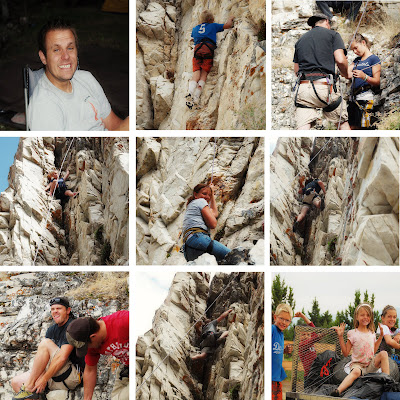 Sunday morning Cody took the kids a mile up the canyon and set up a rock-climb for them. Jason and I showed up just as they were finishing, so we watched Rae and Jaxson, and then we each took a turn along with Ryan and Cody. It was a lot of fun. (For me, it was a lot of fun watching, not climbing, as I am deathly afraid of heights. It took me 20 minutes to get 6 feet off the ground, and that was it for me. I was terrified.) Jason and I are thinking about investing in some rock climbing gear, so it can become one of our family activities. The kids really loved it. On the way home we stopped and checked out the Yost Cemetery and also a few old abondoned houses. It was a great weekend, wish we had a few more months of summer left.
« Perry Family Campout 2010
fascination »