10.13.2010
Oh I have put this off and put this off for so long! Campout was held the beginning of August this year. I came home from campout with over 800 pictures on my camera. Yes, I like my camera. I have just procrastinated pulling them all off and weeding through them. And then I procrastinated this post because there are so many pictures! But, finally, here it is. Campout this year was great. It is so much fun to get together with the Perry clan. It is a hardship and a sacrifice for everyone to be able to take time off of work and out of their lives to get together every summer, but it is amazing that everyone just makes it happen. I put the pictures in groups and I’ll just narrate left-right and top-bottom. 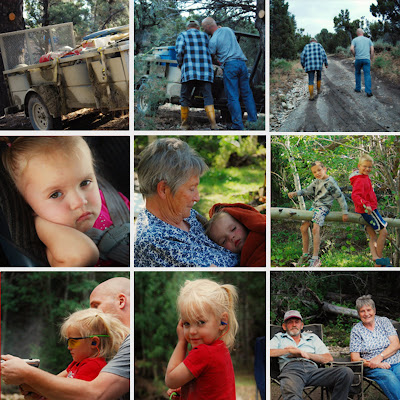 We decided to go for a full week this year, planning to get up there a day or two ahead of everyone else. Things don’t always go according to plan. We left our house a little later than we had hoped, but still thought we would have time. We drove through quite a rain storm and started thinking maybe it would be too wet to set up, but the closer we got, the more we thought it was probably do-able. We drove on through Yost and up to the gate. (We have to cross over private property -with the owners permission, of course- in order to reach our camp spot.) Wouldn’t you know it the gate was locked. It was pretty irritating, but we turned around and headed up towards the cabin, thinking if we hurried, mom and dad could direct us in how to get the key and we could still make it back in time. Well, as you can see in the first 3 pictures, we did not even make it up the hill to the cabin. It was so muddy and wet, we were flat out stuck. (Our 4wheel drive is out.) So, we ended up spending monday night at the cabin with mom and dad, after finding out the key was hidden right next to the gate. Once we finally got up there on tuesday, it was an incredible week. Lots of sleeping, tree climbing, etc. Sienna shot the .22 for the first time and we all just lounged around after getting camp set up. 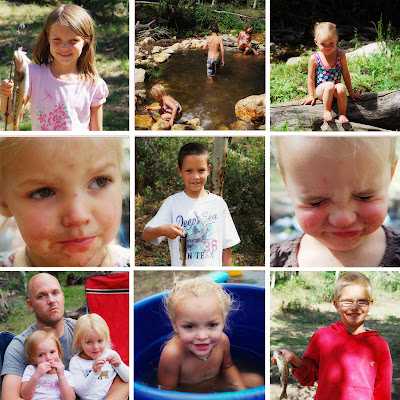 All the kids had a blast fishing, and they did it all on their own, which meant Jason got to relax a little more than usual. Everyone caught something, even though they weren’t much to brag about. We built a really good swim/bath hole. The water was super freezing, but it was still nice to be able to take a dip and de-grime every day. And wash our hair. The little girls were spoiled and took baths in the big bucket filled with water warmed on the campstove. 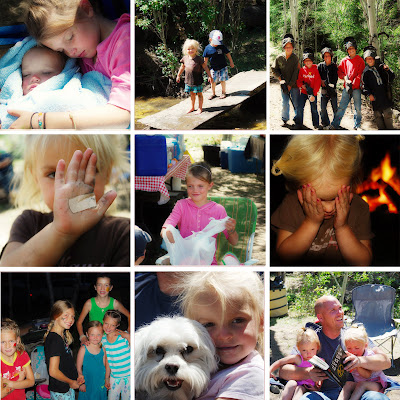 Once all the cousins arrived it got so fun. The boys went paintballing, Sienna and Aidan were inseperable and played in the creek most of the day, and we had a kid white-elephant exchange and auction this year. The middle picture on the left is Sienna showing her boo-boo. She got bit by one of the camp dogs, it bled like a – well I don’t know, but it bled a lot. She was pretty freaked out, and that worried us because she has always loved dogs. By the end of the week she was back to holding and petting all the dogs – except Jack, the biter. She doesn’t seem to have any permanent psychological damage. Phew. Katauna and her girl cousins put on a pajama modeling show, and a little talent show. I don’t have any pictures but Jason and I and the other grown ups were able to do quite a bit of shooting too.

There was a work detail that got started that week, replacing the fence for the owner of the private land we cross. It was too much work to finish in one day, so we decided to go camping again the next weekend. Those pictures to follow.
We missed our Rae girl who was at her first year of girl’s camp, but glad that she was able to have a great time and some awesome spiritual experiences. Can’t wait for next year, we are already planning our white elephants and auction items.

« One more first day of school.
And then there was More Camping »