07.08.2009
My camera is Missing in Action. I can’t locate it. It has disappeared. Oh alright, I really haven’t looked that hard. It’s probably in my bedroom. Regardless of how lost it is, or isn’t, I didn’t have it with me on the fourth. So sad. There was so much going on, and so much I could have taken pictures of. But I didn’t. Moving right along…. this year for the 4th of July, my whole family came over to my house. I figured with the pool up and the park right in our backyard there would be plenty of room to play. I think everyone had a good time. Mom and Dad Gleason, Darren, Debra’s Family, David’s family, part of Ryan’s family, and most of Karen’s family were able to come. Ashley stopped in for a while, as did Amber and Nathaniel. We had hot dogs and hamburgers on the grill. The kids spent a good portion of the day in the pool, or playing soccer. After dinner we all (well almost all) played a rousing game of kickball… my team lost big time. We also had the washers going the whole afternoon…and anyone who has never played washers is missing out. Once it got dark we lit off the fireworks (thanks grandma and grandpa) on the sidewalk in the park. Darren did the lighting, and the rest of us oohed and aahed. McKyla had the presence of mind to shoot a few pictures. 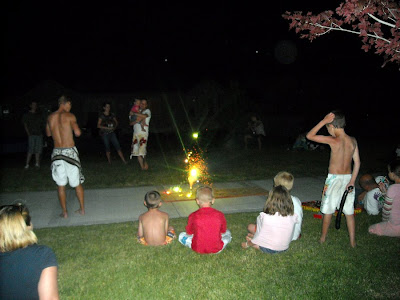 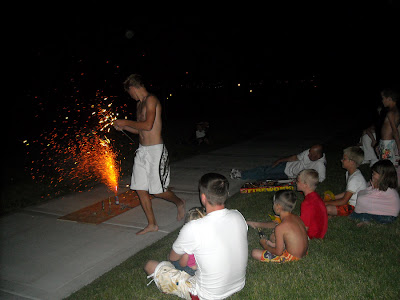 All in all it was a good time. Sorry Ryan missed it – being home with a sick Ada, and that Joe and the Carlson’s couldn’t be there. I hope everyone had fun! Since I didn’t really have pictures to post, I asked the kids to write down what their favorite part of this 4th of July was. Here are their responses:

McKyla: “My favorite part about the 4th of July was that I got to spend time with my cousins, aunts, uncles and brothers and sisters. It was really fun. I got to play a game called washers with my Aunt and two cousins. I think it was the best 4th of July I’ve ever had!”

Jaxson: “My favorite part about the Fourth of July was kickball. My team was up first. I was the first one to kick. I kicked it towards first base about five feet. Someone picked it up and threw it at me and I ducked and it missed. I made a home run.”
Teegan: “My favorite part was when I threw one of dad’s fireworks.”
Katauna: “My favorite part of the Fourth of July was the fireworks. I liked that part because it looked pretty.”
After the crowd dispersed and the clean-up got taken care of, the kids begged and begged to sleep outside, and DAD relented. So we threw down a tarp and they all got their sleeping bags out and slept under the stars. I slept in my cozy bed. I drifted off to sleep with my window open listening to my kids and their dad talking about their most embarassing moments. The next morning, the kids came inside and Teegan looked like this. 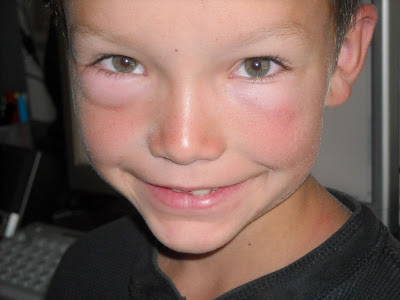 I don’t know what bit him during the night, but his eyes were so swollen I could hardly look at him. It took a day and a half for the swelling to go down, but I guess he’s alright, no permanent damage.
We hope everyone had a great Fourth of July!
« Things that make this mom smile.
Are you kidding me? »